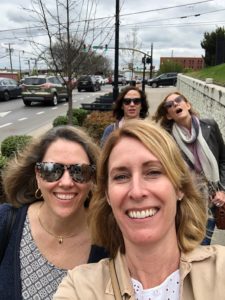 Hi Ho all! Just back from a Fifty is Nifty girls’ weekend in NashVegas, where bachelorettes and middle aged women go to let loose. Lots of open air party buses with listlessly dancing women (and some men), lots of party bikes with hard pedaling men (and some women). I’m sure for all of them, it seemed like a good idea at the time.

I hadn’t been to Nashville in over 20 years, a span of time known in almost-50-speak as “the blink of an eye”. I didn’t remember one single thing about it. But I had good feelings about the city going into the weekend and I still regard it fondly now that I’m home. The food was Southern and delicious and far too plentiful. So were the cocktails. There will have to be some austerity imposed this week. There was a trip to the Country Music Museum where I learned that I know almost nothing about country music. There was also a trip to a restored plantation where I learned that we still can’t find the words to make slavery sound anything less than benign.

The trip was with my college roommates. We had been really good about getting together once a year up until one of us died of breast cancer about four years ago. Then we just stopped. For me it was a combination of weekend getaways becoming exhausting and onerous after my husband began commuting to a job in another state, and the guilt and anger around Kelly’s death.

Our last independently arranged girls weekend (excluding class reunions and Kelly’s funeral) was a few months before Kelly died. We tried to organize it around Kelly’s schedule, but she was going about the urgent business of dying and wanted to spend time with her family, not us. Weird, right? The guilt and anger are leftovers from the few occasions during her last months when she invited me to walk with her on her journey and I was too wrapped up in being overwhelmed by my new life situation to see hers. I haven’t ever really forgiven myself for that and it turns out, I wasn’t alone. My friends and I spent some of our time together discussing regrets and we all have a few about our Kelly.

Does that make it sound like my weekend was sad? It wasn’t really. I mean, I was with women who have, for over 30 years, chosen friendship with me. Who have chosen to forgive me for what I do or don’t do, to love me for who I am and who I’m not, to listen to what I say and to listen even more closely to what I don’t say. They regularly and loyally overlook the worst of me and think the best of me. It’s possible that they might like me better than I like myself. So, 50. It’s coming. And it’s better than the alternative. I’m just glad I have these ladies along for the preferably-not-on-an-open-air-party-bus ride.