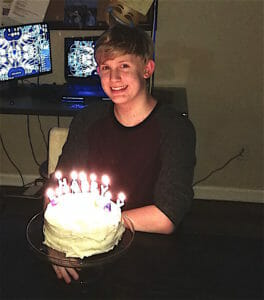 My boy turns sixteen today. The boy who is everything I ever dreamed he would be.

He’s smart but not just formula, dates, times and places smart. Smart in a way that questions and analyzes and sometimes agonizes when answers aren’t conclusions. He is intellectually curious, learning more not because he’ll have to answer a test question but because knowing more makes him better.

He is kind but not just solicitous. He is deeply respectful and caring in a way that isn’t necessarily expected of men and boys and is often considered a bug not a feature. He has faith and a sense of equality. His path is guided by a stunningly accurate moral compass.

He is musical. Not just because he sings and plays an instrument. But because there is a song in his soul.

He is taller than me. His legs aren’t the sticks of a child but the sturdy tree trunks of one ready to shoulder the burden and responsibility of manhood.  His voice is not sweet and piping but deep and resonant. Time and hard won knowledge muffled but didn’t silence his giggle. Now he gets the joke and can tell it too. His laugh, frequent and free enough, is more considered and occasionally cynical.

He takes my breath away with his courage and his certainty. I don’t identify as male and I didn’t have brothers so I don’t know if this is unique to him or if it is the birthright of privileged, white, boy children. He acknowledges his advantages with gratitude even as he follows a path that is clear to him, cleared for him.

I can’t settle on a feeling as I look at this man child. I like the person he is so much. But I miss the little boy he was. His carefree joy, his exuberant expressions of his inner self, his uncomplicated emotions, his open heart. I miss the warmness of his little body on my lap and in my arms. So much that sometimes I have an empty ache in my biceps. I miss the smell of the top of his head. I miss his chubby hands and Fred Flintstone feet.

Today his eventual leaving seems close. Today, I am filled with urgency as I count his diminishing days beneath my wing and hope that I have filled him with love enough for the journey.

Today, more than usual, the tears fall. Today I remember the day I first met this gift of a boy. The day when sixteen candles were a lifetime away. And they were. They have been.

I was wrong. This boy isn’t everything I ever dreamed he would be. He is so much more that. So much more than even my wildest dreams.

They are the sons and daughters of Life’s longing for itself.

They come through you but not from you,

And though they are with you, yet they belong not to you.

You may give them your love but not your thoughts.

For they have their own thoughts.

You may house their bodies but not their souls,

For their souls dwell in the house of tomorrow, which you

cannot visit, not even in your dreams.

You may strive to be like them, but seek not to make them

For life goes not backward nor tarries with yesterday.

You are the bows from which your children as living

arrows are sent forth.

The archer sees the mark upon the path of the infinite, and

He bends you with His might that His arrows may go

Let your bending in the archer’s hand be for gladness;

For even as he loves the arrow that flies, so He loves

also the bow that is stable.”